In the early 1980’s, Dave Davies, of the English rock band the Kinks, wrote the song, “Living on a Thin Line.” He was writing about England as the last century waned, but it resonates today with our current economic situation. Economic life sits on a changing and unstable ground at this moment.

At Auour, our defensive investment positioning has been driven, in part, by an investment world becoming increasingly controlled, influenced, and supported by government entities, with the Federal Reserve being the one we have discussed most often. The government (both fiscal and monetary) assistance was a significant help to those in need but much like kindling to a fire, it is transitory that needs to fuel a more stable source of heat.

Aside from the three immense monetary stimulus packages, the federal government, under both Republican and Democratic administrations, have pushed fiscal deficit spending in recent decades, until today we are at levels not seen since World War II. 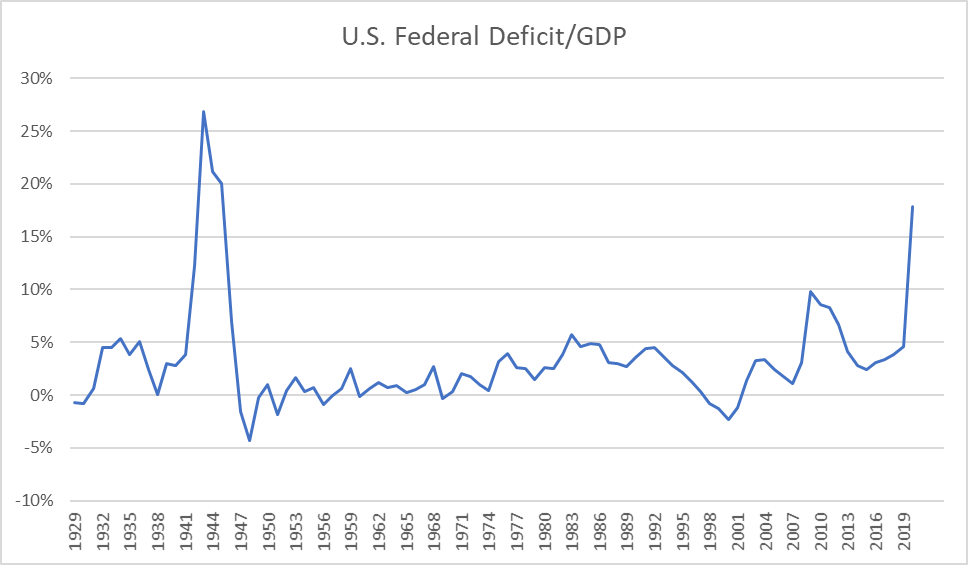 The federal government’s spending to support the economy did indeed produce the desired effect: it eased the suffering brought on by economies grinding to a halt. But basic economic principles argue that the government involvement needs to be viewed as a temporary solution. Money doesn’t grow on trees, and if you have to rely on politicians to keep it sound and stable, you are relying on a cadre of people who optimize around getting re-elected and pleasing you today. Not comforting.

Now, Auour has been consistent in its conservative posture because we see the unstable economic system in front of us, mixed with a rising complacency about highly priced investment assets. That conservative posturing could lead you to believe we are pessimistic about the future. Far from it! We are eternal optimists. We have the pattern recognition to see that time and time again, peoples’ ingenuity brings innovative ideas to life, creating a better standard of living for all. But don’t confuse our optimism for a better future with optimism about positive investment outcomes persisting over the short-term.

The economy is experiencing a fundamental shift, one that was starting prior to the pandemic but has now accelerated out of necessity. Older generations are quickening their move from high tax cities/states to lower tax regions; potentially hollowing out past great cities. Younger generations are finding they can do their work remotely at a lower cost to them and their employers. Medical advances, driven by the epidemic, have quickened the pace of pharmaceutical development that once the pandemic sits in the rearview mirror, energy can be refocused on past health priorities. Advances in blockchain technology are predicted to launch us into the third wave of the internet; threatening the technological dominance currently thought to be a defensible characteristic of major companies such as Facebook, Google, and JP Morgan. These changes all justify our renewed optimism that humans can and do adapt to and improve their surroundings and take control of their destiny.

However, the changes also bring about uncertainty and our reason for the title of this commentary. A thin line, a tight rope, a dark room. Whatever analogy you care to use, we are in a period of instability between a known past and an uncertain future. As with all past innovation cycles, the eventual winners are not likely to be the past winners. The strengths that allowed fleet-footed winners of the past to flourish often calcify with lumbering and bureaucratic “scaled” businesses slow to adapt and react. Well-established institutions, be they public or private, are replaced with the new. Life evolves. And as we sit with a change in the demographic guard, priorities change.

The technological advances we see are happening at the same time as the Millennial generation takes hold of the economic environment. When one thinks of the economic activity by age, the Millennials are hitting their stride as they look to marry, buy their first homes, have their first kids, etc. All of this drives a higher level of investment and spend. The dramatically larger size of the Millennial generation (versus the Gen-X) will likely drive an economic growth period much different than that experienced by the build of the Gen-X generation. We use the term different as we notice a change in spending priorities and not just a difference in numbers. 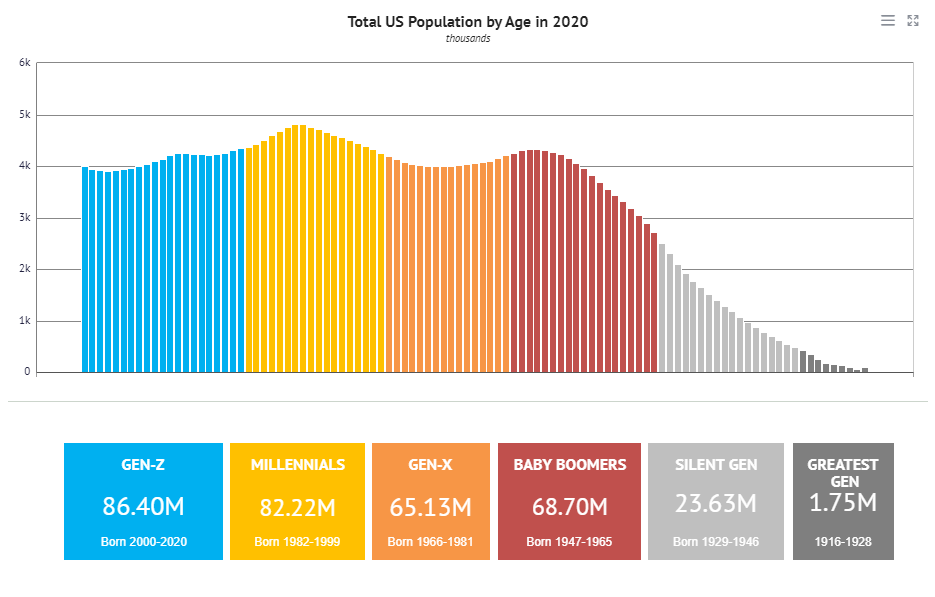 We are seeing a dramatic change in purchasing behavior as the substantial size of the Millennial generation takes hold, and it looks only to be gaining momentum. We will highlight just one example, the rise of the B Corp, a new type of corporation that looks at more than just profits, in this newsletter, but we expect to discuss others throughout the year.

Corporate history has long been driven by the goal of serving the shareholders, but that is changing. The global investment markets are seeing a move from profits-only to a tri-party focus on profits, social impact, and the environment. Within the U.S., the dominant corporate structure is the C Corp. However, about ten years ago, another corporate structure came onto the scene. The Benefit Corporation (B Corp) structure encourages leaders of B Corps to broaden their view to incorporate more than just profits by incorporating a broader view of corporate responsibilities. In 2007, there were less than 100 companies registering as B Corps. That number has expanded to more than 3,000, with more than 34 states in the U.S. recognizing the enhanced corporate structure. Patagonia may be the most recognizable B Corp, but Coursera, which just went public, is, too. It won’t be the last.

The Millennial generation is behind this movement, and this shift is likely to continue as their generation’s wealth grows while older generations’ wealth shrinks, proportionally.

So far, we have highlighted technological advances and a shift in priorities and generational buying power. That should bring hope to all, but also a respect for the uncertainties in front of us, which makes economic forecasting ever more difficult. But, hey, if that is not enough change for you, let’s add a changing tax landscape to the uncertainty pile?

The new administration is looking to make profound changes that will bring lasting effects. Some are likely to be good, others will inevitably be bad, but all will require a period of adjustment. We offer an excerpt from an article on April 5 in Fortune:

Treasury Secretary Janet Yellen is prepared to build a new global economy from the ground up, a new, restructured world order. The former Fed chair, with a penchant for concise and precise language, is known for her disdain of hyperbole. It’s that aversion to alarmist rhetoric that lends significant weight to the wide-reaching plans she relayed in her first major address as a member of the Biden administration on Monday.

One could imagine playing a board game where new players are added, the rules keep on changing, and then someone comes by and shakes the table. In other words, we see a lot of variables with little confidence in the interplay between them. Yet, market participants continue to push markets to new highs. It makes one think that complacency is also hitting new highs.

This changing landscape, and increasing threats to past winners, were on full display in Jamie Dimon’s 2020 Annual Letter to shareholders. In the JPMorgan CEO’s view, which took more than 60 pages to lay out, the world is bright with positive changes occurring, yet he is seeing a shift in the landscape that threatens their dominance, and therefore, their profits.

“Economic models are a great discipline that force you to think through the interplay of many factors, often over many years. Unfortunately, however, a lot of people use models like they do certain facts: to justify what they already believe. While we should definitely use models as tools, they should not be determinative, as they simply cannot account for much of humankind.

Certain pivotal factors are too complex or qualitative to incorporate into a model. In evaluating a company or the economy, for example, models quite often fail to properly account for culture and morality, the character of players involved, the increasing importance of education and skills, the value of dignity of work, the power of self-confidence as a secret sauce and the emergence of new technologies, just to name a few.”

As we have seen in past shifts in economic power, the go-to strategy is to buy a bit of all the new actors, betting that in that vast bucket are a few eventual winners. However, we also remember that such behavior can lead to false confidence in the likelihood of profitability. When we bet on everyone, some come out as winners, sure, but the majority fail, leaving investors with poor returns. We saw it in the late 1920’s, the late 1960’s, and again in the late 1990’s. We offer the following valuation graph, which we will continue to update over time as we move through this unpredictable market environment. 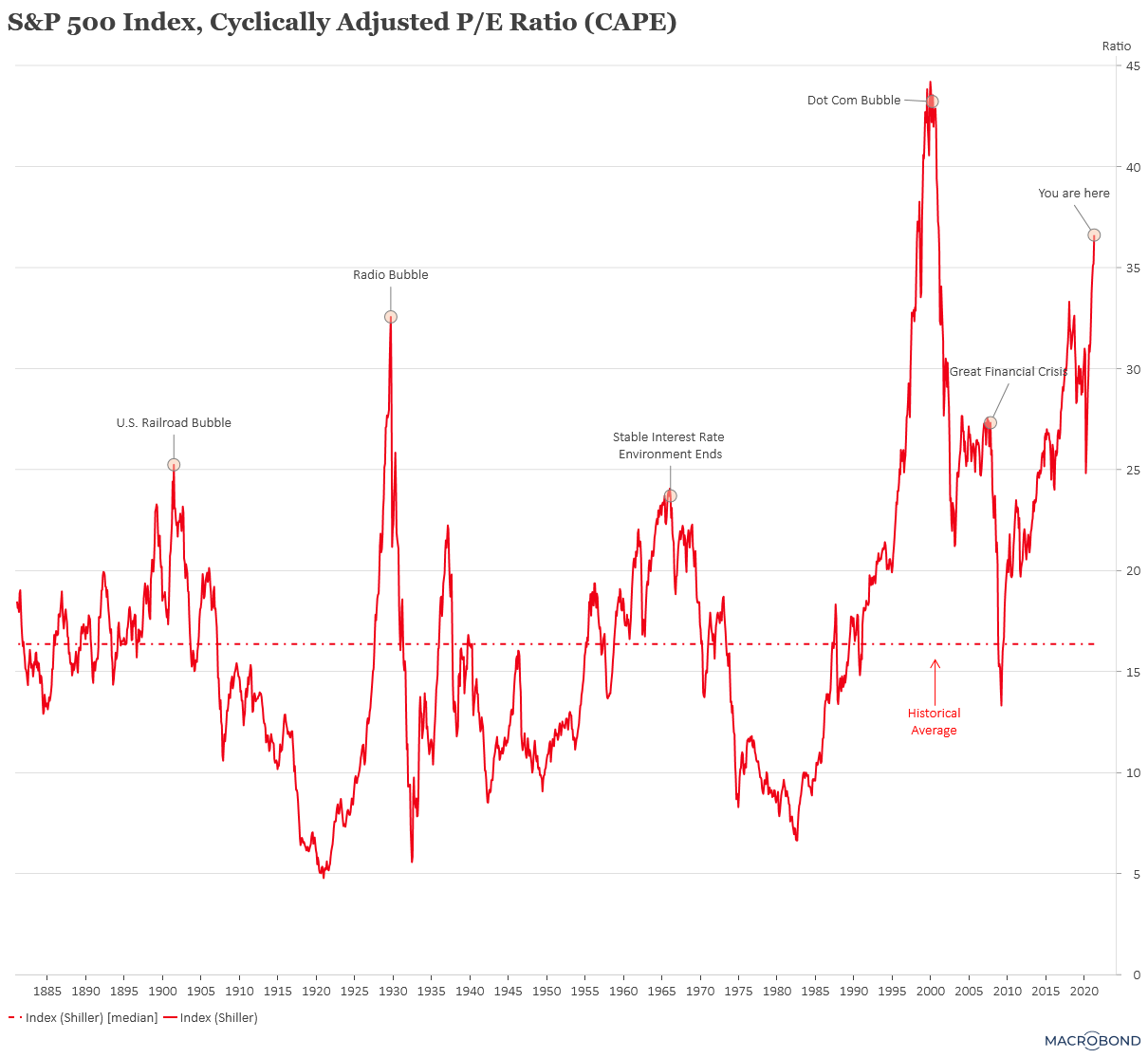 Again, we need to separate the optimism about new technology and behavioral advances from what we see as a rising complacency that unwisely assumes the future is well known and safe from obstacles.

We want to end on another quote from Mr. Dimon’s letter:

“The raw power of America is often represented by our incredible military might. In reality, however, our raw power emanates from our economic vitality and strength, which have always been predicated upon freedom, free enterprise, and the promise of increasing equality and opportunity for all.”

No matter how optimistic one is about the future, the uncertainties we face need to be respected. We are at a crossroads: technological progress is accelerating, a generational shift in priorities is upon us, and our government is intent on playing a larger role than ever. When walking through a dark room without knowledge of what lays ahead, do you walk faster and with confidence, or do you tread lightly, feeling your way around the unknown? We are participating, but we are protecting ourselves. No one wants bruised shins.